Since time immemorial, Kashmir has been referred to as the cradle of several crafts. According to Kashmir ruler, Mirza Haider Dughlat, “in Kashmir, one meets with all those arts and crafts which are in most cities uncommon.” French physician & traveller, Francis Bernier, who visited Kashmir in 1665, believed that “it is due to special properties of water available there.”

Francis Bernier, who came to Kashmir in 1665

The Dogra period (1846-1885) witnessed the sharp rise of certain crafts that reached their climax. In the words of H.W.Bellew who visited Kashmir sometime in 1873, praised the artisans of Kashmir, their Kashmiri shawls and embroideries. Also, silver work, paper mache paintings, stone engraving & wood carving all exhibited work of wonderful delicacy & minute details. In fact, this was reiterated by Lawrence, a settlement officer in Kashmir in 1889. He said, “Every Kashmiri is a weaver and the home spun cloth woven by the villagers was highly appreciated by many Europeans.” It was actually during this period that the Kashmiri shawl making employed a large number of people, which in turn generated revenue for the state.

The “Royal” identity of Kashmiri shawl

Kashmiri shawl manufacturing has its roots in the picturesque state of Jammu and Kashmir. Here the air is crisp and art runs in the veins of its people. In the 1800's, the Kashmiri shawl was considered a symbol of imperial prestige. Infact no fashionable woman’s wardrobe was complete without this luxurious piece. It enjoyed name and fame across the world, owing to its softness, warmth, brilliance of colours and sublime fineness. 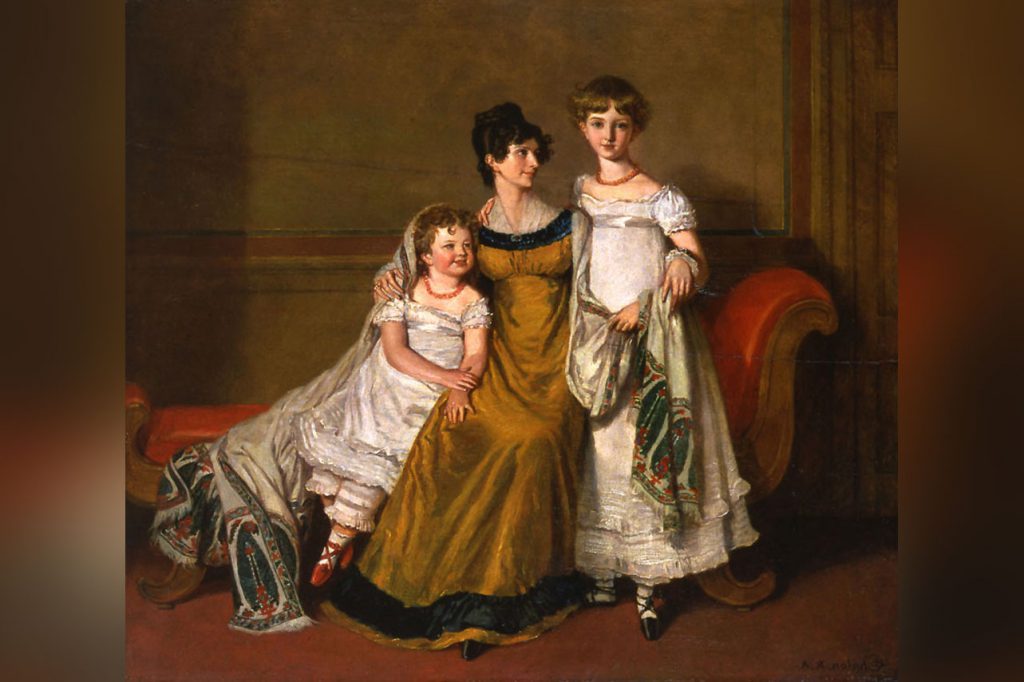 Mother and Two Children by A E Chalon, c. 1812.
(courtesey of the Geffrye Museum)

Under the Mughals, shawl making made several strides, with karkhanas creating new social groups among its craftsmen. In the text Tuzk-i-Jahangiri, Emperor Jahangir expresses fondness for Pashmina shawl and calls it one of his “favourite items.” It was considered a status symbol in the Empire and was gifted as part of imperial festivals.

In the Afghan period, shawl making grew further and in 1796, these Kashmiri shawls were sent to Europe. These objects of desire reached Napolean during the Egyptian campaign, who then gifted it to his wife Empress Josephine. At that time, many French soldiers returned with plundered Pashmina shawls worn as belts over their uniform. It became severely popular in Europe and as the demand rose, merchants traveled all the way to Kashmir to purchase them.

During the Sikh period, shawl making continued to receive consistent patronage. Now it became fashionable even in Punjab and also popular in Lahore. During the reign of the last two Sikh rulers, the Kashmiri shawl manufacturing witnessed a decline from 1841-45. This was also due to some political disturbances in the region.

When Gulab Singh became the Maharaja of Kashmir, the shawl trade began to revive. In 1846, the total number of looms reached 7,000 with 17,000 weavers working at that time. The same year, there were 3,500 karkhandars in the Valley. However, in 1847, several shawl weavers migrated to Punjab and the number of looms reduced. 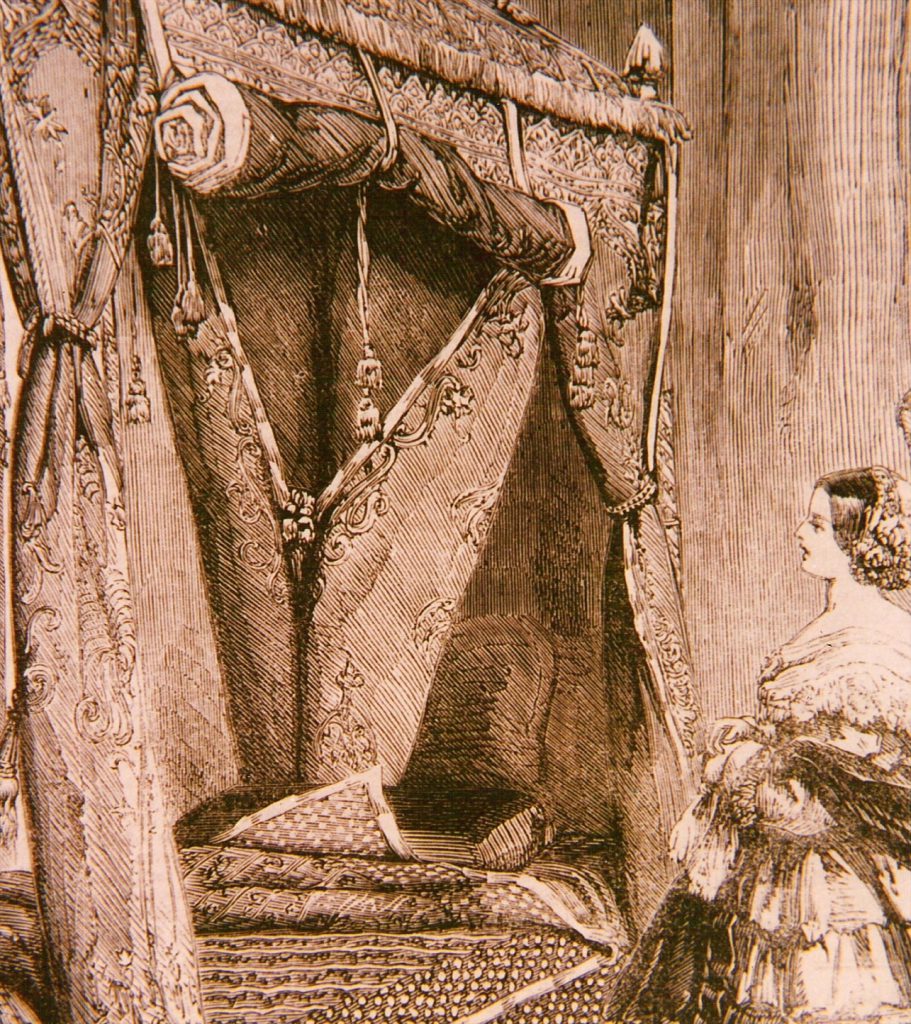 In early 1847, the weavers put out certain demands. These were early enumeration of workers, reduction of nazarana , fixing length of a work day, & framing proper regulations for their welfare. More than 4,000 weavers migrated to Lahore and this worried Gulab Singh. He announced the following regulations:

Though these regulations pacified the weavers, but only for a short while.

Later, in the 1950s, French agents came all the way to Kashmir to deal with the manufacturers. This way, Kashmiri shawls became more popular in Europe and trade flourished. According to a Frenchman Larouosse, “In spite of heavy duty levied by the French government, whatever its value, the trade flourished.”

Flourishing of Kashmiri Shawl in Europe & Invention of Do Rukha

In 1850, the annual shawl production reached Rs 40 to 50 lakhs and there were about 40,000 to 50,000 workers engaged in the manufacturing. During the second half of the 19th-century, it became a coveted fashion item in England, France and America. It was during this time that Kashmiri shawls became prestigious and the favourite of elites and nobles.

In the concluding year of Maharaja Gulab Singh’s reign, there were about 8,000 shops of shawl weavers in Kashmir. Post his reign, Maharaja Ranbir Singh tried to bring about reforms to further provide an impetus to the manufactory. During this juncture, a new type of shawl called dorukha was manufactured in the Valley. They were excellent in texture, soft, colourful and were most celebrated. Among countries across the world, it was France that shared 80% of shawl trade between Kashmir and Europe. 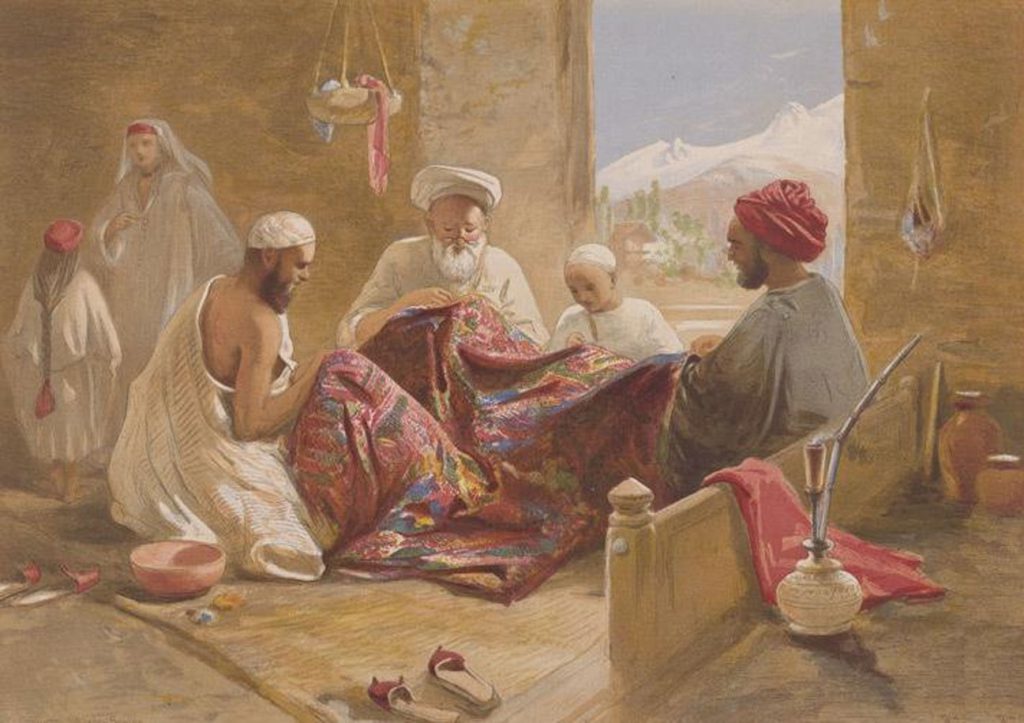 What are Kashmiri Shawls made of

The manufacturing of the shawl happens from what is called pashm. It was obtained from a goat found in western Tibet, Baltistan and Ladakh. It was brought to Kashmir via Ladakh. The pashm fibre is first removed by combing. During winter, it is a protective layer of soft fleece that provides insulation to the goats in the biting cold. The Changpas say that only when the winter comes to an end and the goat eats the first new grass that the pashm rises above the surface of the goat’s body. It can then be combed out.

The pashm that is combed out is not really clean and has dirt and bodily secretions. The women who sift through this raw mixture say that only 35% of this pure fibre can be used. Once the hair is combed, the animal’s shaggy coat is then cut with metal shears. A few goats are combed at the same time, generally before they head out to their pasture lands. They may be again combed in the evening, only if there’s adequate light by the time they return after grazing.

This is a painstaking process. Starting from sourcing the fleece to crafting products from Himalayan cashmere is a long tough journey. It takes months and years for the gifted artisans of Kashmir to create the masterpiece Pashmina shawls. It is a sorry state of affairs when imitation pieces flood the market. This dilutes the labour of these weavers, who shed all their blood, sweat and tears to this "Art of the Royals”.

We are Pashmina.com, the largest curators of pure and handcrafted Pashmina products in the online space. We are on a mission to revive this dying art of Pashmina by spreading our wings throughout the world through our online platform. Our website serves as a window to our range of Pashmina shawls and Cashmere wraps and scraves that are luxurious and have the highest quality. We offer the widest range, certified quality of Pashmina with a luxurious packaging and free shipping to over 250 countries. Explore our range now!

We, Pashmina.com, are the largest curators of pure and handcrafted Pashmina products in the online space. We are on a mission to revive this dying art by spreading our wings throughout the world by way of our online platform. Our website serves as a window to our range of products that are luxurious and have the highest quality. We offer the widest range, certified quality, luxurious packaging and free shipping to over 250 countries.